“The book is poignant and powerful. The combination of your family's talented
contributions, the beautifully restored photos, the impressive appendices, and the
skillful yet passionate writing leave one with a feeling of deep appreciation of
your generous investment of time and talent to preserve the memories of these
heroes. And your prologue and epilogue are well carved bookends that give the
text emotional and humane extra special meaning. I wish more people were like
you–an obvious renaissance man who has admirable values and a tangible
commitment to them.” — Perry A. Zirkel, University Professor Emeritus of
Education and Law, Lehigh University

“This wonderful book offers a uniquely personal and thoughtful perspective on
the lives and passions of the Army Air Force aviators of World War II, who risked
everything for the greater good and the survival of mankind. It does so through a
riveting account of the experiences of Captain Edouard J. Jacques, lead
bombardier on an Eighth Air Force B-24 Liberator heavy bomber, as told
decades later to his dear friend, Judge Arthur G. Capaldi. The author does a
masterful job of conveying how everything Captain Jacques accomplished during
his military service was intertwined with his love and desire for Marie, his young
bride waiting for him in West Warwick, Rhode Island, as well as his religious faith
– neither of which ever faltered. Reading this many-faceted book will surely enrich
your life. How many things can you say that about?” — Joel Johnson

“This author captures the power of love with a true American hero who couldn’t
wait to serve his tour of duty so that he could return to the woman pining for him
back home.” — Harold Trafford, Providence Journal, Ret. Editor

“What an amazing read…a history, a love story, and a tribute to the Greatest
Generation…The book captures the life of an aviator, a hero from a small
American town. At times, I actually felt like I was in that B24.”
– Lt. General Reginald A. Centracchio

“Very well written. These men were truly the Greatest Generation and I
appreciated your excellent work to chronicle one of their lives and experiences in
the face of ultimate danger. My dad piloted a B24 in the 458th bomb group 754th
squadron at the end of the war in Europe. He flew on missions 26 and 29 that Ed
participated in along with thirteen others. He spoke very little about his service as
did many of these veterans, but I thank God every day for their courage and the
freedom that we enjoy because of them.” — Amazon customer

“Brilliant, passionate work of art which is a must read! I was captured on the first
page by the human-interest story of the war. Loved the way it was written with
personal accounts, historical facts and stories. Fell in love with the people and
could relate to the hometown references and places. Recommend this book to
many friends and family.” — Kindle Customer
“Amazing read from the first page!” — Amazon Customer

“I enjoyed the book immensely…especially since Marie was my aunt. Amazing
that all that happened 72 years ago and was recorded with such detail.”
— Amazon Customer

“A well documented history of love and heroism during WWII. With this book, one
gathers a world of knowledge about the training of WWII pilots and navigators
with accounts of each of the 35 missions executed by a real hero, Edouard J.
Jacques of French-Canadian ancestry and a native Rhode Islander. Author
Arthur G. Capaldi, longtime friend and neighbor, broke Jacques' decades-old
silence of his experiences in a B-24 plane mainly over Germany. He also
interviewed, decades later, most of the crew on Jacques' two different warplanes.

He devotes a chapter each to two incredible pilots: Merlin Tebbs and Fred Eisert
for whom Jacques was their navigator on different missions. Jacques kept a
detailed diary of each of his missions. The unifying elements of this book is first
and foremost the ardent love he and his wife, Marie, shared during their 69 years
of marriage. The reader learns why his love for her motivated him to settle for the
Air Force, to volunteer for thirty missions and to marry away from home. The
second unifying element is Edouard’s incredible luck to survive all thirty missions.
He attributes his good fortune to Marie, the love of his life, to the members of his
crew, especially the pilot, but foremost, to a single person whose memento he
carried with him at all times. I personally did not believe that I would read the
entire book as military jargon does not interest me. This book satisfied my thirst
for history and my curiosity of how it must have felt to be in a B-24 on missions to
Germany. Traumatic. One learns why the Cologne Cathedral remained as the
only building untouched while 1,300 bombs from squadrons of B-24s.”
— Amazon Customer

“Wonderful love story from my hometown of West Warwick, R.I. I was captured
on the first page by the human-interest story of the war. Loved the way it was
written with personal accounts, historical facts and stories. Fell in love with the
people and could relate to the hometown references of the people and places.
Recommended this book to many friends and family!” — Louise Vanasse 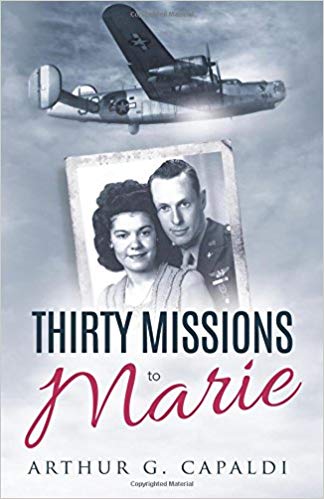